Gideon Denton has a secret: he found his woman. Life as a Denton is never easy, and it certainly doesn’t help being in love with a woman who doesn’t love you back. That’s the legacy they have to live with.

Emma Colton doesn’t want to be near the Dentons. Instead she wants a clean start, away from violence, away from her past.

But when tragedy strikes the Denton household, Emma has to come to terms with her reality. She can’t leave, and Gideon has just admitted she’s his woman

After Gideon threatens his father and has to be punished for it, Emma comes between them. She will not let anyone hurt him. However, challenging Maddox Denton carries severe consequences. With the risk of death on her shoulders, she has no choice but to marry Gideon in order to save the both of them.

Secrets start to unravel, all manner of violence shining though. The Dentons don’t have a choice but to take out one of their own. Who will do the deed? Who will risk death to save the others?
It’s another fight, but this one is to the end.

“With you I’m going to make more than memories.”

She glanced over at him.

“What are you going to make?” she asked, genuinely curious.

She kept staring at his face, seeing the determination there. It was kind of surreal to know that he loved her even though she only cared about him. She’d always liked Gideon, and she felt a little guilty that even as he was all in,she had only just realized that they were supposed to be together.

“If my father was alive, I wouldn’t even be allowed to sit in this car with you,” she said. “He’d have killed you.”

“I know. It would have been tough. Our families were enemies, but now, Emma, you belong to me.”

“You’re really not holding back, are you?”

“I can’t hold back. If witnessing my brother’s pain and anguish is anything to go by, I’m not going to waste a moment. We’re here.”

He pulled up outside a nightclub. The line to get in the door was so long. As he pulled up, a valet opened her door.

Before the man could help her out though, Gideon was already there, moving him out of the way. He handed over his car keys. She expected him to go to the back of the line. She should have known better. A Denton didn’t wait for anything.

He led the way into the nightclub, which was so incredibly loud. The noise seemed to bounce off the walls, and the energy was thriving.

She looked all around, seeing some women and men in cages dancing. The floor was full to bursting as men and women danced. They were practically fucking each other.

Gideon took her right to the dance floor, pushing past some of the dancers as he kept a firm hold on her hand. Once he was at the center, he turned, holding her close. One of his knees slid between her thighs. The skirt she wore wasn’t tight, so as he rubbed against her pussy, the skirt went with the movement.

Biting her lip at the instant hit of pleasure, she stood confused.

He took control though. Taking her hands, he placed them on his shoulders, making her hold him as he cupped her hips.

The beat of the music flooded the dance floor, and she held onto him. He wouldn’t let her look away. His gaze captured her, holding her still as she watched him.

He leaned in close, his lips against her ear. “You’re perfect, you know that,” he said.

She shook her head.

“Don’t worry, I’ll spend the rest of my life showing you just how perfect you are.” 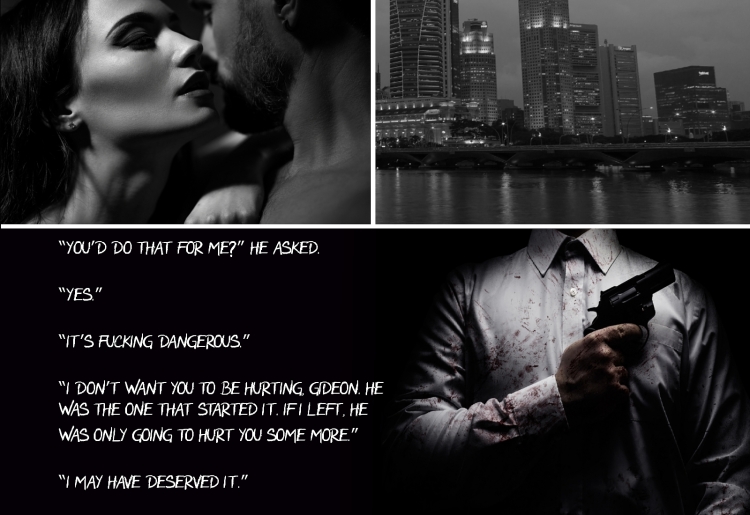