Sometimes falling under is the only way to reach the top.

Olivia has lived a life of privilege, but she’s always stayed grounded, and known she’s not better than anyone. Being used as nothing more than a status symbol for her family, she’s always been alone in the world.

Mason has one priority; get enough money to make sure his sister lives. He’ll go to the very depth of depravity to make sure the one person who means everything to him keeps breathing … even if that means taking Olivia and ransoming them off.

But now that he has Olivia he realizes this isn’t as cut and dry as he thought it would be. He’s starting to care for her, and he can see in her eyes she’s right there with him.

Their lives colliding might not have been in the traditional sense, but it’s exactly what they both needed.

They are exactly what they both needed.

Mason has no problem going to hell and back to get vengeance on the ones who took everything he’s ever cared about. Blood and violence are what he’s good at, after all. 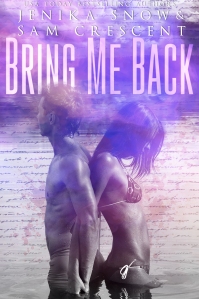 BRING ME BACK (a new adult standalone)

“When darkness sweeps you under, you can either fight to get to the top, or let it drag you under.”

When darkness sweeps you under, you can either fight to get to the top, or let it drag you to the bottom.

The past is behind me, and now it’s time to enjoy life, or that’s what I tell myself. That’s what I’m trying to do.

And then he sweeps into my life like a tornado. But he doesn’t destroy me…he helps heal me.

Until Adrian I was content to let it pull me to the bottom.

Until Adrian I was content enough to keep moving through life.

But I’m done pretending that I’m happy with who I am, with where I’m at. I want to let Adrian show me that living doesn’t have to be toeing the line. And I don’t care what anyone says, not Alex, my brother, and certainly not my childhood crush, Holden.

I’ve never let my past dictate who I am. Fighting has been the only solid thing that keeps me grounded, that lets me get out the self-hatred and pain I keep buried deep down.

But then I see Skylar. She’s the most beautiful girl I’ve ever seen.

She has her own darkness, her own heaviness that weighs on her. With her I feel like the world is right, that things make sense.

She says I’m helping heal her, but she’s the one who makes me feel complete.

I’ll go to any lengths to keep her by my side, even if that’s going up against the two people

David knew about staying in control, about focusing at the task at hand. It was because of those traits that he was the CEO of his company, knowing that playing by the rules was how to get to the top.

But when it came to Lisabeth all bets were off.

She was his daughter Rachel’s best friend. Lisabeth was too young for him, too innocent. But that didn’t stop him from wanting her or ultimately making her his.

But being with Lisabeth would be wrong, crossing lines that could potentially ruin everything.

And yet with all of that at stake, he still knew he would go after her. Lisabeth was the only one he wanted.

She shouldn’t want him because of who he was, but that didn’t stop Lisabeth from lusting after her friend’s father. He was older, refined and experienced, and she compared all other men to him. And for years she had managed to stay in control of herself and her emotions.

But in the end it didn’t matter how wrong it all might be, because being with David was where she should have been all along. 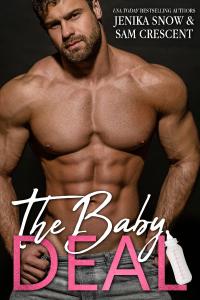 The deal was simple.
Alexis wanted a baby and so did Deacon. No dotted line to sign on, no lawyers involved. Just an agreement between two neighbors to get her knocked up and have the one thing they both desperately desired.
A baby.
And as easy as that sounded, how uncomplicated it should have all been, it was anything but.
Alexis was in love with Deacon.
Deacon was in love with Alexis.
But both were too afraid to admit how they felt to the other … until they weren’t.
It should’ve been a simple agreement—a baby deal—but it turned out to be so much more.

From that first time Abel saw her there was no doubt in his mind that she would be his. This sweet little virgin stuck in a storm, soaking wet and cold, and no one but him for miles.

With the storm raging outside his cabin and both of them trapped inside, he didn’t know how much self-control he could have around her. It was that moment when he first saw her that he knew he couldn’t let her go, that Shea was meant to be his in all ways.

He just had to convince her to stay, that living off-grid with a caveman was exactly where she was supposed to be.

Shea should have been afraid of the stranger who showed up at the exact time she needed help. He was big and muscular with a mountain man vibe going on. The way he looked at her had her body heating in ways she’d never experienced before.

When he brought her back to his cabin in the middle of the woods maybe she should have been frightened. But the truth was she’d never felt more at home, like she was in the right place, with the right person.

She was a virgin but she knew one thing for certain … Shea wouldn’t be innocent for much longer.

Sugar (Co-written with Jenika Snow)
Buy Links:
Amazon US–> https://amzn.to/2O1Udra
Amazon UK–> https://amzn.to/2LUlsGJ
Amazon AU–> https://amzn.to/2KhY3u7
Amazon CA–> https://amzn.to/2M97iOM
Nook–> https://bit.ly/2vc4sCf
Kobo–> https://bit.ly/2O0uJuj
iTunes–> coming soon!
It was annoyance at first sight.
She had a smart mouth on her that had Colton’s blood racing. He put all of himself into his work. He didn’t have time for a relationship or for these feelings Sugar brought out in him.
But Sugar wasn’t like anyone else. He shouldn’t want her but he did. He didn’t deserve her, but he knew he couldn’t stay away.
It started with his dog knocking Sugar on her ass. It ended with her wanting so much more with Colton. He was arrogant and sometimes cold. But underneath that ice and rock he was gentle, sweet even.
She wanted to chisel away at the wall he’d built around himself. She wanted to bury herself in his heart.
They both wanted the same thing but denied it through and through. It wasn’t until they were forced together that they had to face the reality.
They were meant to be together. 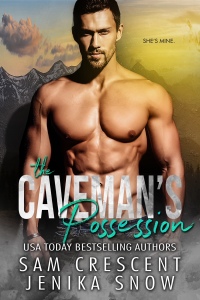 THE CAVEMAN’S POSSESSION (Cavemen, 2)
Amazon US–> https://amzn.to/2oVfKHF
Amazon UK–> https://amzn.to/2N3cZ5e
Amazon AU–> https://amzn.to/2NALnnw
Amazon CA–> https://amzn.to/2N2odab
Nook–> https://bit.ly/2MYZnbe
iBooks–> https://apple.co/2NwZc6D
Kobo–> https://bit.ly/2CDiJhn
She didn’t know it yet, but she’d be mine.
From the first moment I saw Shauna all those years ago, I knew that I had to have her.
Sweet and innocent, she was the soft to my hard, the feminine to my masculine.
I was done waiting, done pretending like I had any self-control when it came to her.
I was ready to show Shauna just how possessive she made me.
Maxim. The man I loved. My father’s boss.
He kept to himself.
Lived out in the middle of nowhere.
Was big and strong and had every womanly part of me coming alive.
And I’d loved him for as long as I could remember.
But I didn’t have to make my move because Maxim was staking his claim … on me.

From the moment Millie walked into his restaurant looking for a job, Lucas wanted her. But being with her would cause problems. He was her boss and it was against the rules … his rules. Not to mention, as a single father, he couldn’t just let any woman near his son.

But Millie was different. He knew she was special from the moment he looked at her.

No matter what he planned, Lucas knew he had to have her and he was willing to do whatever it took to claim her as his.

Wanting her boss came with plenty of complications, mainly that Millie knew there was no reason for a man like Lucas to want someone like her.

But when he showed interest, Millie didn’t try to fight the chemistry they had. As Valentine’s Day approached and the restaurant was in full swing with everyone wanting to express their love, Lucas and Millie’s relationship bloomed.

But what would happen if Lucas wanted to take it to the next level?

Could Millie throw caution to the wind and give herself fully to Lucas in the name of love?

As Luck Would Have It

When Felicity was nearly run over, it’s Hawk that’s there to catch her before she falls…literally.

He’s strong, handsome, and smart, and gave back to the community. Hawk’s everything a woman would want, but he’s also her competition.

They come from two rivaling bakeries, so that should mean there’s no way they can be together. But it seemed fate had other plans.

Because as luck would have it, once Hawk had her, he’s not letting her go.

It shouldn’t have been as complicated as it was.

Stay away from his employee, the one woman he wanted more than anything else.

But Brice had wanted Bunny for the past two years. He’d watched her … craved her. And despite the fact he was used to getting what he wanted, the one thing he desired but couldn’t have was her.

But two years was a long time to wait for the one thing you desperately needed in life. And Brice was done waiting.

He was ready to finally make Bunny his, even if that meant chasing her until she realized they belonged together.