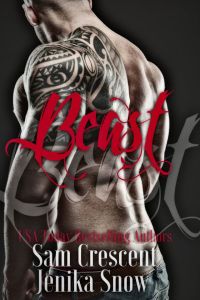 Bridget is in trouble, and knew the only person that can help her is Beast, a hardened biker she’s grown up with. He isn’t just a man, but a rough around the edges, dangerous and raw alpha that acts first and asks questions later. He is also patched in with the Soldiers of Wrath: Grit Chapter, a motorcycle club that does what it has to do to stay on top. But in order for Beast to help her she’s going to have to give something to him in return … her body.

He frightens her, but also arouses her, and she knows being his means more than just surrendering herself.

Can Bridget let go and submit to the biker, or is being Beast’s in all ways going to end up breaking her?

King has always lived his life the way he saw fit and didn’t care what anyone thought. Women were just a passing hobby to waste time and warm his bed. Being the VP of the Soldiers of Wrath Grit Chapter meant he had other responsibilities and priorities besides taking up with an old lady. But then Clara came into town and something shifted in him. For the first time in his life he felt possessive and territorial of a female. It felt damn good, but it also messed with his head, especially when she claims to want nothing more from him aside from the monster he’s packing behind his fly.

Clara won’t ever settle down, and no man will ever own her. Visiting a friend in Grit, she discovers King, a man who refuses to back down. All she wants is to have some fun and to save enough money to move onto the next town, the next adventure. Every time she tries to get away, King is there, giving her a reason to stay. What will she do when King makes her realize she’s falling in love? Can she trust him with her heart? What happens when she does try to run? 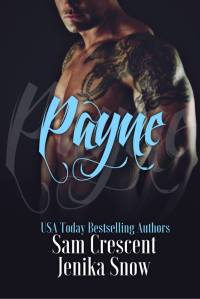 Vicky is in love with Payne, the President of the Grit Chapter MC. But Payne is a complicated man, and she knows he only sees her as a warm hole to relieve himself in. The heartbreak over that is real, but she loves him too much to stop what they share.
She may be a fool, but she’d rather deal with a broken heart than call things off with Payne.

Payne and Vicky are explosive in bed, and he doesn’t want that to stop. But he also won’t admit how he feels. He’s never cared about anyone the way he does for Vicky, and maybe he’s a bastard for keeping his mouth shut, but he doesn’t want to ruin what they have by saying anything.

Keeping her at a distance, and only being with her between the sheets is what’s best for both of them. At least that’s what he keeps telling himself.

When Vicky finds out she’s pregnant with Payne’s baby, she knows she can’t stay with a man that doesn’t want a commitment. Leaving is the best option for her and her unborn child.

When Payne finds out Vicky left, he realizes how badly he screwed up. Now he’ll do anything to bring Vicky back, and make her his old lady. She’s it for him, and he’ll prove that to her.

But what happens when he finds out the secret she’s been hiding … that he’ll be a father?