Taken By Her Mate 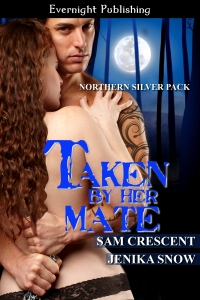 A virgin betrothed to a womanizer...

Addie has been promised to Brendan since her birth. She no choice but to follow through and become the mate to a shape-shifting wolf she doesn’t love. But when Shaun, a childhood friend and the male she has always wanted, refuses to let her mate with another, she is afraid her love for Shaun will cause destruction between their packs.

Shaun has loved Addie since they were children, but she is promised to another male. Claiming her can start a war between their packs, but Shaun can’t stand back and let another male have her. When the heat between Addie and Shaun ignites, they know their attraction can’t be denied. But Brendan isn’t about to let Addie go, and when she is taken, Shaun will stop at nothing to get her back.

“It doesn’t matter, Shaun. The pack won’t let me be with any other males.” He bared his teeth at her in a purely animalistic way. When he leaned in close she felt his breath tease the shell of her ear.

“Addie, when I say you are mine, I mean you. Are. Mine.” He took her mouth again in a bruising kiss that had her heart stuttering. “There is no one that will keep me from you. I made the mistake of leaving you, knowing you would mate with Brendan. I let others dictate what I should and shouldn’t have in my life. Not again.” The conviction in his voice scared her more than his actual words. Shaun had never acted like he wanted her as a mate, but the way he spoke, so passionately, told her otherwise.

“It’ll be war between our packs, Shaun.” A look crossed his face, but she couldn’t tell what it meant.

“Nothing will keep me away from you. Not again, Addie. Not again.” Tongues dueled together, and she found she didn’t have the strength to push him away again. It would have been the wise thing to do, but she couldn’t. She was sick of denying herself. Too many years she had let others run her life. For once she wanted to do something that would please her.

His hands gripped the edge of her dress, his knuckles brushing along her thighs.

“Let me in, Addie.” His eyes implored her to listen to what he said. His words weren’t sexual, but from the heart. A suspended moment passed between them, and she felt herself nod. A look of pure male satisfaction crossed his face, then he was on his knees before her.

Heart pounding wildly, she stared down at him. To have such a big, powerful male at her feet was a little surreal. His hands started at her ankles and slipped up her calves and stopped at her knees. The whole time he kept his gaze locked on hers. Licking her lips, she nodded because Addie knew that’s what he had been waiting for. Ever so slowly he pushed her dress up, revealing her thighs and silk-covered pussy to his gaze. The feel of his hot, hard breath against her flesh had her cunt creaming. She was so wet, ridiculously soaked for Shaun.

“I want to taste you, baby. You’ll let me, Addie, won’t you.” It wasn’t a question. His hands tightened on her dress as he lifted it higher, baring her rounded belly. She was far from thin, but the way he looked at her, as if her body was made to be worshipped, had any feeling of being self-conscious leaving her. Letting her head rest against the tree, she licked her lips. “Yeah, you’ll let me do whatever I want.” His mouth was suddenly on her pussy, his tongue licking at her through her panties. It shouldn’t have felt so good, but it did. God, but it did.

“Shaun.” His name left her on a soft moan, and she closed her eyes and spread her legs wider. She felt his finger frame either side of her pussy a moment before he pulled the lace of her panties aside. Cool air met her overheated flesh, but that was short-lived when his hot, wet tongue delved between the folds of her cunt. “Oh, God.” The feel of his thumbs spreading her lips apart nearly had her coming right then.

It has been a busy couple of months and I’m sorry that this place hasn’t been all that fun to hang out in. I will try and get it up and running with guests and competitions, I promise lol.

So what has been happening? Well, the main thing I’m really excited about is working with the wonderful, Jenika Snow. We’re writing two series together at the moment and the release of Taken by her Mate is scheduled for Monday August 5th. Here is the cover and you can find the unedited blurb on the Coming Soon page under Evernight.

I hope you will all enjoy this story. Jenika is amazing to write with and I thoroughly loved every minute spent on this book.

Also, I’ve got a new release coming on August 13th, Loving a Vampire. This is a novella and a standalone so don’t expect any series or cliffhanger endings lol. I love vampires and I hadn’t wrote one for Evernight and now I have lol. I love Augustus and I hope you guys do as well. Here is the cover.

In other news I asked on Facebook, which book would they want me to write next and I’m asking here. Out of all my series I’ve got going, what is the book you’re craving for?

I look forward to your comments.

Have a wonderful weekend.