I know some time has passed since I last put up a random blog post but life has been crazy and has not stopped. Christmas has always been hectic and this year was no different. The time passed so fast, before I knew it, I was celebrating the New Year.

During this year I’m hoping to keep you all updated on everything that is going on in the world of Sam instead of waiting till the last minute. My plans for this year are all over the place. I know I want to continue the stories that I’ve started but I also want to bring more series to you. I’ve got more series and (fingers crossed) longer stories.

I really want to delve right in and show you all so much. So, my New year’s goal is to show you more of me and my muse. Expect more variety and more length. I hope so anyway.

I find New Year’s resolutions hard to keep and I like to think of them as more goals than resolutions. I feel I will keep to them than with the resolutions. Dieting and all that other stuff is out of the window lol. When the muse hits, I answer her call.

Do you have any goals you want to share? I’d love to hear what you have planned for 2013.

Kick starting the New year, His to Control has already release at all the sites. A start to my variety is my first male/male romance releasing by Siren. 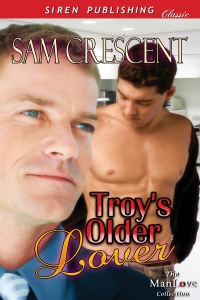 Troy Stone is in love with his boss. He knows he has no chance with Joshua. For one, Joshua “Josh” Hudson is not gay, and second, why the hell would the older man even look at him? He’s only a personal assistant.

However, a kiss soon leads to so much more.

Without thinking, Troy kisses his boss after an innocent night out. All too soon the kiss leads to much more than either man expected. When Troy has to leave to go back home, Josh goes with him for comfort. While he’s there he learns how much he feels about Troy and the happiness that can be gained.

But Troy pushes him away, and Josh has to decide if he’s willing to put both of their happiness to the test or to simply walk away from the unknown.

Josh leaned down and brushed his lips against Troy’s. There was no response from him. “Either tell me to go or touch me, Troy.”

A split second passed, and Josh knew Troy was going to ask him to leave. His heart felt heavy. The pain smacked into his gut, holding him down like a lead weight.

Josh didn’t give him time to change his mind. His lips were on Troy’s in a heartbeat. He pressed him against the wall, holding him steady as he plunged his tongue into his mouth. Their moans echoed around the room. Troy finally put his hands on him. His touch went down Josh’s back, around his waist, and up to circle his neck. Josh caught the hairs at the back of Troy’s head and pulled his head back. There was a gasp, followed by the sweetest sigh Josh had ever heard.

The need to fight his own feelings was strong, and he pushed all negative thoughts to the back of his mind. He didn’t need the added pressure of feeling he was doing something wrong. How could something that felt so right be so wrong? It was perfect.

“You’re wearing too many clothes,” Josh said, brushing his lips down to his neck. He inhaled the sweet fragrance of Troy’s cologne along with his own unique body scent.

He gave Troy enough time to unbutton his shirt then peeled the fabric from his shoulders. Troy had thick shoulders that had more to do with size than muscle. Josh got his own physique from the amount of exercise he did. “You feel so good,” he said.

Josh touched the younger man’s body, wanting more but not knowing how to ask for more.

“Let’s go someplace more comfortable.” Troy took his hand, leading him through to the sitting room. The couch was only a two-seater, and he understood why from the size of the apartment. It almost made him ashamed at the size of his own three-story home. He sat down on the couch beside Troy. There was no sound to be heard. They were both naked from the waist up. Josh saw Troy had no tattoos at all, unlike he did. He loved getting a tattoo. The only problem was the eagle on his back. He’d requested Natalie’s name under the tattoo only to have it removed and coloured in several months ago.

“Why do you have a tattoo on your back?” Troy asked, almost as if he was reading his mind.

“I love getting ink. The only problem with my profession is the fact clients don’t like seeing ink on their lawyers. I have to refrain from it being seen.” He turned his hand over, showing the intricate design of a dagger plunging through a heart on the inside of his arm.

“Is that why you wear long shirts?”

“Yes. I don’t want to talk about my ink, Troy. Come here.” He crooked his finger, telling Troy to come closer. There was a smile decorating his lips. Josh moaned as the other man got closer. The feel of him pressed against his body was heady.

Their lips touched, and little fireworks went off inside Josh’s body. He’d never felt such a primal connection as he did with Troy. When they were together, the world faded. Even when they were working, Josh always felt like they were the only two people in the world. Was this destined to happen between them?

Josh did not believe in fate or destiny. He believed in emotions and action. What was happening between them couldn’t be explained. All he had to do was allow his heart to lead for a change.

For the first time in his life, Josh felt deliriously happy. He’d never felt like this with Natalie. Josh ran his fingers up and down Troy’s back. Goose bumps erupted on his own flesh. Troy put a hand on his chest and ran his fingers past his nipples and down to the flat panes of his stomach.

He moaned, kissing Troy, then paused as the other man’s hand touched his cock. The excitement made him release pre-cum into his pants.

He watched as Troy unbuttoned his pants. The zipper was lowered. Josh wore a pair of black boxer briefs. He lifted up for his pants to be pulled down. Troy went to the floor before him. Josh saw his cock was thick and outlined by the boxer briefs he wore. “We can stop if you’re not ready for more.”

Josh shook his head. He was more than ready. Everything that had ever happened in life he’d dealt with. He wasn’t lying when he said he’d regret walking away from Troy.

“I’m ready.” He pushed his boxers down his legs, watching as his shaft sprang straight up for attention.

This was it. Once they crossed this next line, there was no turning back. Usually, he’d feel a slight twinge of fear at being plunged into the unknown. Most of the other times in his life he was alone when dealing with the unknown. This time, he wasn’t alone. He had Troy. His very loyal personal assistant.