Blaine: Christmas at The Skulls 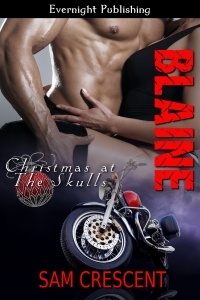 It’s Christmas at The Skulls and you’re invited.

When it came to Emily, Blaine messed up. He knocked her up and wasn’t there for her. He went off the deep end and lost everything including his woman and his daughter.

He owes Angel everything for bringing his girls back into his life.

Emily has tried to forget the past and move on but she can’t. Blaine is back to being the man she fell in love with but for how long? Can she trust him? There are so many questions that she can’t answer.

It’s the time for forgiving. Blaine’s determined to prove to Emily he’s not going anywhere. He’s back and he’s taking her as his wife. Will she accept or leave him for good?

Nothing is ever certain at The Skulls!

This was what he loved about Emily. She was a natural woman. There was nothing fake about her. Lenard was right. She loved with her whole heart. Emily never gave half. It was always full. But she was giving him half of herself. She was scared to give herself completely, and he’d been the one to destroy that part of her. He’d make sure she didn’t have a choice but to love him.

He removed his hand long enough to open the buttons on her pajama shirt. Blaine revealed her tits to his gaze. They were large, full, and the tips of her nipples were rock hard.

“Beautiful,” he said, stroking a thumb over one hard bud.

“I’ve been thinking about seeing you like this for a long time.” He leaned in close, flicking the tip of her dark red nipple with his tongue.

They both groaned. The sound filled the air between them, echoing off the walls.

He sucked the nipple into his mouth as he pinched the other. Blaine flicked the tip a final time before moving toward the other. He slid his hands down her body to rest on her pajama bottoms. His cock was rock hard, and he wore a pair of sweat pants that didn’t hide his raging erection.

“Don’t worry, baby. I’ve got you covered. I’m going to make you feel so good.” He went to his knees and started to remove her pants. Within seconds he had her completely naked. Leaving the bed, he tugged his sweat pants off. He wouldn’t fuck her this morning. The only time he’d fuck her was when she was begging him to do it.

Crawling on the bed, he opened her thighs, seeing the fight in her eyes.

He didn’t give her a chance to push him away.

Blaine opened the lips of her sex, pressing his thumb to her clit.

She arched up. Her tits shook with her indrawn breath.

“Are you as juicy as I remember?”

He closed the distance between them, opening her pussy to see her swollen clit. She was soaking wet. His mouth watered, and he didn’t wait for her permission. Blaine sucked her nub, groaning as her cream filled his mouth.

“Blaine.” She screamed his name, thrusting her pelvis up against him.

“So wet and so juicy.” He moved down to her entrance and pressed his tongue inside. She tasted musky, sweet, and exactly like his woman. “You’re perfect.”

“Do you want me to make you come?”

“Yes. Please, Blaine, I need it. I’ve not been with anyone else but you. I need you.”

Plundering her cunt with his tongue, he stroked her clit. Her screams grew louder as he teased her pussy.

“This is my pussy, Emily. I took your virginity. I lay claim to it. You gave birth to my child. The only dick this cunt will ever see is mine.”