Autumn is finally here or I think some of you call it fall. Anyway, I consider this the month of the pumpkin, purely because it is he month of Halloween. There is so much happening this month that I feel I’m going to get dizzy lol. 🙂  The main point of this month is from October 18th, I’ll be writing full-time, so I’m hoping to have a lot more stories for you guys.

First in my list is the Evernight Publishing two year anniversary celebration. For this celebration all Evernight titles have 50% off at All Romance E-Books. Check them out here. All of my titles with Evernight are in the sale and it is your chance to pick them up at a bargain price.

Also, The Bad Boys’ Virgin Temptress is representing the May/ December category for the 99 cents Amazon sale.

Cheryl Fisher is a virgin on a mission. She’s spent the better part of her life caring for her sick mother. On her death bed, her mother made her promise to live life to the fullest and to never take one moment for granted. In order to fulfill her promise, she goes in search of the two men she can trust with her body.

Noah and Drew have had their eyes on Cheryl for a while. Both men know they want to share her. When Noah learns the truth about her virginity, he’s shocked by the possessive feelings he has towards her.

Together, they must show Cheryl that there is more to them than their bad boy reputation. They want her with them forever, and they will do everything in their power to fight for her.

Also, this month will see the release of three of my books. His Obsession (The Owners 2) will be released on October 11th and the start of a new series that I’m waiting for cover art. I’ll tell all when I know more.

The story that is releasing first is the second book in my Long Mead series with Siren.

Here is all the information: http://www.bookstrand.com/dominating-cassidy 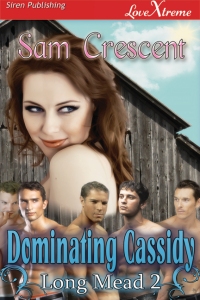 Cassidy Jocks has been forced to make a choice. She either chooses Gary, Scott, Roy, and Jesse Walker or she chooses Michael Hall, the local sheriff. She can’t do it, and when she goes to tell her men that she can’t pick, they give her the best option available. She can have all of them.

Her life with her men is a dream come true. Gary is fierce and loyal. Scott is confused, but she sees the love inside of him. Roy is cheeky, and Jesse is her best friend. Michael is the dominant.

Their relationship is working well, but when a misunderstanding causes Gary and Scott to attack Michael during his time with Cassidy, she knows it’s time to leave.

Cassidy stays with her sister. She learns a few facts about herself and the love she has for her five men. Will she have the strength to fight for them? Or has her change of heart come too late?

Note: There is no sexual relationship or touching for titillation between or among siblings.

The journey home was a tense one. Michael and Jesse had a hand on each of her thighs. Their touch threatened to send her over the edge. She’d never known pleasure like what they were doing to her body.

In no time at all, Michael was pulling up at the ranch. Cassidy was sure he’d broken the speed limits trying to get home. Minutes later Gary’s truck pulled up.

“You’re mine. You’re not in charge tonight. We are.”

“I want to see you all.” Michael took charge ordering everyone to do as he wanted.

They moved her into the sitting room. She saw them piling cushions onto the floor. Roy and Jesse were naked. Scott pulled her panties down and removed the scraps of her dress. The black stiletto heels were the only thing she had left.

Michael grabbed her ass and thrust his pelvis against her stomach. “Get naked. I want to see you all.”

She left the men who were dressed and wandered over to Roy and Jesse. Cassidy glanced down and stopped in her tracks. She was no virgin, but she’d never seen cocks like the size of the ones Roy and Jesse were sporting.

“I’ve never seen anything so big.”

“I think we’re all going to get along,” Scott said from behind her. He pulled her hair aside, kissing her neck.

“How are we going to do this?” Michael asked.

“No plans, just let everything come naturally,” Cassidy said. All of them were naked. She stood and turned in a circle to stare at all of them. Her pussy throbbed from the sight of five sexy, hard-muscled, hard-shafted men.

Jesse grabbed her from behind and lifted her breasts to the men in front of her. “Who’s going to have the first taste of these tits?” he asked.

Scott moved forward. He cupped her cheek, grazing her lips with his. Seconds later, his hot mouth sucked her nipples. She cried out as the pleasure-pain of what he was doing sent goose bumps erupting all over her flesh. Cassidy closed her eyes. She couldn’t stop the intense sensation of what they were doing. She felt like a wanton hussy.

Her legs were spread and two fingers slid between her folds. Opening her eyes, she gazed down to see Roy between her legs. She cried out. Gazing past Scott, she saw Michael and Gary sat in a chair, watching her and palming their large shafts. Their pre-cum glistened in the small light provided by the lamp. Someone must have turned out the main light. The setting was perfect for fucking. She licked her lips which made both of them moan.

“I want to feel your lips around my dick,” Michael said.

All three men let her go. She walked over to Michael and knelt at his feet. He ran his fingers through her hair. His touch calmed her.

She took his cock in her hand, feeling the heat through her palm. Opening her lips, she consumed the head, licking off the jewel of semen that had gathered. She moaned as the explosion of his musky taste filled her mouth. Michael was big, perfect, and tasted even better.

“Fuck me, that looks good,” Roy said with a growl.

“She’s got the sweetest mouth. I don’t know if I’m going to last.”

Michael grabbed a fistful of her hair and began to control her thrusts. She held his dick at the base and took him deeper in her mouth.

“Come on, baby. You can take a little bit more,” Michael encouraged her. Cassidy relaxed and worked more of his length inside her. “That’s it. Take it all. Make your master proud.”

His words sent a frisson of excitement through her. He was her master, and she his willing slave. She moved her hand away and took all of him to the back of her throat. It took some time for her to swallow past the gagging reflex, but with his soothing words, she sucked him in like a lollipop.