Me again! As you know, Plain Jane and the Mafia Beast is releasing August 28th, and I’ve got all the pre-orders, which I’m posting below. Also, here are some of the teasers I’ve been sharing on Facebook. 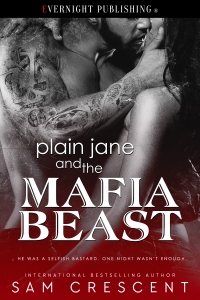 When Arika Jane is shot, Vincenzo knows he cannot dump the waitress he’s just met and leave her to die, so he takes her home in the hope of helping her heal. He’s not a normal, everyday man. He’s the mafia beast with the skill set to hunt, torture, and kill anyone who betrays the Galiza family.

Arika is aware of the dangers within the world, but waking up in the bed of one of those dangers wasn’t in her plans. She doesn’t expect Vincenzo’s kindness either. He is willing to do whatever it takes to keep her alive, which means keeping her out of his life.

It should be easy. She’s just a plain woman. Yet he craves her touch, wants her innocence for himself, and one night, he decides to have her. For one night he can claim every single part of her.

But one night isn’t enough. To keep her, he has to protect her from the demons of his professional life. But he can’t keep her a secret for long. All he can hope for now is to keep her alive.