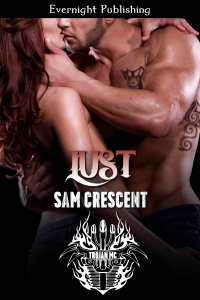 Ever since he saved her from almost getting gang raped, Raoul hasn’t been able to get Zoe out of his mind. When he’s with a woman, it’s Zoe he thinks about, but he can never have her. This MC life is not for her.

Zoe has become obsessed with the rough biker who saved her over six months ago. She is trying to move on, but she can’t forget Raoul. When she finds out that her new roommate’s boyfriend knows of the club, she refuses to pass up his invitation to a club party.

What she finds sends her running. But Raoul can’t believe Zoe was in the club, and now he’s not going to let her get away. He’ll have her for his own, claim her as his old lady, and soon take her as his wife.

The passion between them is fierce, the lust burning brighter than any fire, but how can their relationship last? She’s in college, and he’s part of a deadly MC club. What will happen when Zoe discovers that Raoul has lied to her? Will she run from him?

After all, she’s not the only virgin he’s bedded, so how can she be special to him?

Raoul tugged his shirt up over his head while Zoe started on his belt. Placing his hands over hers, he took them away from the belt.

“There will be time for that.” He nudged her back against the bed, tearing her shirt from her body. She wore a white lace bra that showed off the dark red of her nipples. His mouth watered for a taste of her body on his tongue. “Lie back.”

Zoe eased down on the bed, and he caught the pants resting on her rounded hips. Sliding the loose pants down her body, he took her lace underwear along with them.

Her cheeks were a lovely red from her blushes, which contrasted with her red hair.

She was already soaking wet.

Raoul sank to his knees before her, pulling her back to the edge of the bed. No other man had touched her pussy. She was untouched, pure, and all his.

Holly had been a virgin, but then he’d not appreciated the sight before him. Zoe was a treasure, a precious jewel within his crazy world.

“What are you doing?” she asked. “Is there something wrong?”

Even if this is your one and only chance with her?

Raoul doubted he’d come to see her once he had her. He rarely liked to fuck a woman more than once. The club whores only held his attention because they knew what he liked and didn’t try to hold back from him.

“You want to talk about that now?”

“What better way than when I’ve got you where I want you.” He stroked his finger over her clit, watching her scream. “I can get you to be honest with me instead of trying to castrate me.”

She laughed, and he loved the sound. In fact, he was starting to love quite a bit about her. Zoe licked her lips, pressing a hand to her head. “I hated that you were with another woman.”

“What about the fucking? What did you think of that?”

“I didn’t mind.” He stared down at the evidence of her arousal.

“You don’t look like you’ve got a problem with people fucking in public to me.” He held his slick fingers up for her to see. “This is all the evidence I need.” Raoul sucked his fingers into his mouth, moaning at the taste of her on him. “Fuck, you taste so good.”

“You’re doing this on purpose. I’ve never done anything to you.” She whimpered, raising her hips up for him.

“You’ve been torturing me for months. Every time I thought about you, I got hard.”

“I bet it didn’t last long,” she said, snapping the words at him.

“Wrong. I fucked those women, but they couldn’t help me with my need. I wanted you, Zoe, only you. I didn’t want anyone else. They were a means to stop me coming for you.”

She placed her hands underneath her head to stare at him. “You shouldn’t have gone to them. You could have come here. I wouldn’t have turned you away, Raoul.”

“You just made a big mistake,” he said.