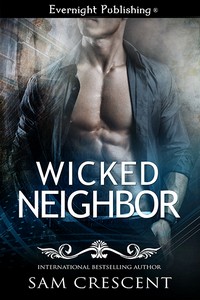 Charlotte lives next door to a man of sin. Nearly every day she watches a new woman leave his house, looking satisfied. Bryan makes her nervous though. She doesn’t know what to say to him when he does talk.

Bryan is curious about his mousy little neighbor. He likes to watch her blush but that’s it. She was the kind of woman to demand exclusivity and that’s one thing he doesn’t do. However, one night while on a date, he discovers a side to Charlotte she didn’t even know.

Can Charlotte give in to her wicked neighbor’s demands? Is there any way to trust him? Can two unlikely people find love?

“The only difference between us, Charlotte, is where you’d like to stay in with a good book, I like to stay home and fuck.” She gasped, looking up at him with her eyes wide. “Do you think I’d like to be sitting around a table with people I barely know?” It was a little lie. He knew Michael well. “I wouldn’t. I’d prefer to be at home right now, balls deep in a willing pussy. She’d be dripping wet, begging me to fuck her, spank her, and give her everything I could.”

Charlotte dropped her arms to her sides. Her chest heaved with each of her indrawn breaths.

“I’d have them tied to my bed or suspended with rope, I’d slide their legs open, and fuck them, make their tits bounce as I pound into that sweet pussy.”

“Lift your hands above your head.” His cock was so fucking hard. He imagined he’d bust the zipper open from the pressure building.

“I punish women who don’t do as I tell them.”

She slowly lifted her arms above her head.

He didn’t expect that. Well, he did and he didn’t. Wishful thinking couldn’t bring him a submissive.

“Don’t talk, Charlotte. Don’t say a thing. Let your body say what it needs to say.” He closed the distance between them, pressing his body against hers. She was totally soft, everywhere. There were no hard bones or ridges. Running his hands down her sides, he moved them both to the edge of her dress. Gathering the fabric up in his fist, he glided his hands over the flesh of her thighs. She didn’t speak or make a sound.

Staring into her eyes, he held her captive. Something was going on between them that felt more natural to him than breathing.

Charlotte was a little submissive at heart, waiting for a man like him.

Placing his palm over her pussy, he groaned. Her panties were dripping wet, soaking. Pushing the fabric aside, he slipped a finger through her sopping folds.

“Oh, Charlotte, my little neighbor, you’ve been keeping a secret from me.”