It has been a long couple of weeks but I can tell you that I’ve got 3 books in print.

Tate Johnson is the daughter of the motorcycle club leader and has decided The Skulls has hurt her one too many times. Moving out of her home and cutting her ties from the only family she knows, she starts a life for herself, hoping to create new memories.

Murphy abandoned Tate for the sake of the club, but now he’s back, determined to win the love she once felt for him. But, Tate’s not letting go without a fight. She’s stubborn and refuses to listen to him.

The Club is in lockdown when two local cops are killed. An attack is ordered on Tate, but no one knows the identity of the person intent on taking down The Skulls and controlling the town of Fort Wills. No one is safe as the club is compromised. Lives are lost, people are hurt, and some will never be the same again. Everything comes down to Murphy, and he has to make a choice.

He can save his club … or his woman. Which will he choose?

The biggest mistake he’s ever made could get him killed.

The Skulls have a set of rules, and Nash has broken one of them. He’s using drugs. Since Sophia rejected him, Nash has been spiraling out of control. When he puts Eva’s life in danger it’s up to Nash’s brother Lash to save him from himself.

Sophia never realized the protection The Skulls provided her until she was attacked. Lash saved her but with an ultimatum. She helps save his brother, or he makes it known she’s not under Skull protection.

Sophia’s feelings for Nash have always been her weakness. As she keeps her word to his brother, trying to help Nash overcome his addiction, the two of them grow closer through his pain, and Sophia realizes she cannot run any longer.

However, The Skulls’ enemies are numerous, and Nash’s careless behavior has exposed the whole club to danger. Someone is plotting against the club in the hope to take control of the town, and they’re going to start with Nash. Can he stay strong as his life and that of his woman are endangered, or will he relapse into the drugs? 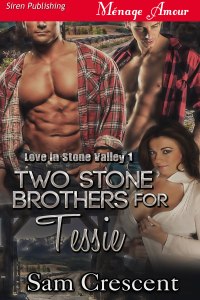 Tessie Holland has dealt with some loss in the last five years. Her father is dead and she had to move out of her family ranch with her mother. She works at the local diner as a waitress to help pay the bills. The only highlights in her life are the mystery packages that are left on her doorstep. Who could be sending her these gifts?

Markus and Brant Stone have been in love with Tessie for a long time. They never want to see her without and have made sure she gets everything she wants by leaving her gifts, anonymously. However, they cannot wait anymore. They intend to tell her the truth and to claim her as their woman.

When the Stone brothers try and buy back Tessie’s home ranch they stumble upon some distressing revelations. Soon they are diving into something that neither brother can protect her from.

It’s a race against time to protect Tessie from the truth and to also protect her from the man who wants to end it.

2 thoughts on “New Books In Print”