This is just a quick update on Death’s Dirty Demands. He’s releasing December 8th and is now available at Amazon for pre-order. 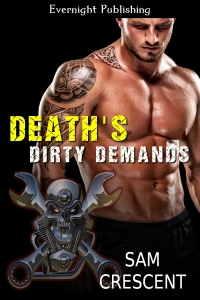 It’s the festive season, and the Chaos Bleeds MC is spending it at the clubhouse, where the women are making it sickly sweet. Death has tried to keep his distance from the redhead, Brianna. He knows there’s something different about her, but unlike his brothers before him, he refuses to fall for the woman who plagues his thoughts.

Brianna was sold as a sex slave by her uncle, but then in the midst of the fallout from Gonzalez, Devil and his crew saved her. Out of all of the Chaos Bleeds men, Death intrigues her the most. She knows she should keep her distance, but when Devil gives her an ultimatum—to become a club whore, an old lady, or leave—she doesn’t have much choice.

Death offers his protection. He wants her, but no other brother can have her. She never expects feelings to enter the equation. Keeping Death out of her heart is a lot harder than she anticipated.

Can Death bring himself to love a woman with a murky past, or will he pass her on when he grows bored?