It’s here everyone. Contract of Shame which is Richard’s story. 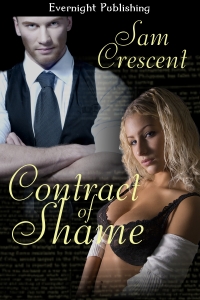 Richard Shaw doesn’t believe in love. He does believe in getting what he wants, and Scarlet Hughes is next on his list. In his world, there is nothing he can’t have. All he needs to do is find her weakness.

Scarlet is a single mother trying to make ends meet. A nightmare from her past keeps her cut off from men and relationships, but a steaming kiss one afternoon in the office leads to her shame.

For one week, Scarlet will give Richard her body and in return he’ll give her the means of giving her son a good future.

But when her past comes back to haunt her, Scarlet can’t hide from her fear any longer, and Richard must risk everything to claim what is rightfully his.

Will Scarlet find it in her heart to forgive him?

“You used your money and power over me to get me to do what you want,” she said.

“No matter how I got you, you’re still here, and I wouldn’t be anywhere else.” His words baffled her, and he silenced her with a kiss. She melted under his touch. His hands cupped her face and tilted her head back to give him better access. Scarlet moaned and wound her hands behind his neck. The shirt he wore created a rough touch against her pointed nipples.

As a hand moved back to grasp her neck, she gasped and opened her mouth. He plunged in, touching her tongue with his.

He tasted of warm whisky and masculinity. Richard swamped her in size and shape. She didn’t know who broke the kiss first. He moved down her face to her neck, nibbling along her exposed collarbone. Her eyes shut, and she moaned as he bit down. Her neck and ears were ultra sensitive.

Her nipples pointed out against the negligee. She took a breath as he eased a strap down off one of her shoulders.

Scarlet opened her eyes and stared into his smoky depths. He didn’t look at what he was doing but continued to gaze into her eyes. The strap went down her arm slowly, and then he removed the other until the negligee pooled at her waist. Her breasts were exposed to the cool air. Still he didn’t look. His hand cupped one. Scarlet broke their gazes and stared down at where he touched her. His thumb stoked along the tip of one sensitive but firm and erect bud.

“They’re so big and full,” he said. Seconds later he buried his head against her chest. His tongue glided over the tip he had aroused with his fingers.

Scarlet was shocked as she stared down at her boss’s head and became even more aroused at seeing him tongue her.

She had fucking gorgeous tits, and he wanted to suck on them all night long. The large, red nipples filled his mouth. She truly was a full woman. The indent at her waist looked so tiny against the full, rounded hips. The red highlighted her figure perfectly, and he applauded his taste in clothes.

Never before had he picked out clothes for a woman, but with Scarlet he wanted to go that extra mile. He didn’t want faceless people dressing his woman. Richard wanted to see her in clothes he knew she’d look stunning in. Her complexion and figure really worked in the deep red.

When she walked out of the bedroom, his cock had sprung to full attention. Even now the tip was soaked in his pre-cum, his trousers unbearably tight. He wanted his clothes off and Scarlet on the floor with her legs wide open, so he could fuck her sweet cunt.

Richard couldn’t do it. He wanted the first time to be exquisite torture and to last as long as possible, to draw out the pleasure until they were both begging for release.

She stood before him waiting for his next command. Didn’t she know what to do? He didn’t care. He didn’t want to think about her other partners.

By the end of this week he’d have her begging him to keep her.