So, if you follow me on Facebook, you will know that I’ve been working on a super, possessive, alpha hero with stalker tendencies. He’s nearly here. Just a few days to go, and I’m so excited. Release date is October 2nd 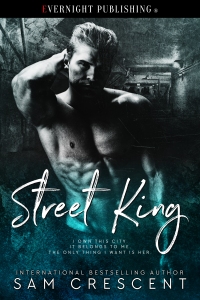 I own this city.
It belongs to me.
The only thing I want is Hannah Ray. She’s my ray of sunshine.
I don’t deserve her.
I’ll take her.
Keep her.
Because that’s the kind of monster I am.

West Gallo is not a good man. Having risen up from the gutter, he is undefeated and cruel, and no one can take his crown. They are all under his rule, and he is the king—until one chance meeting changes his world forever. Hannah Ray breaks through his ice, and there’s no way he can let anyone else have her. She belongs to him, and he will arrange her life to make sure he gets her.

Alone in the big city, Hannah doesn’t know what she wants, but staring into the blue eyes of a stranger in a bar, she can’t help but be drawn to him. She can’t stop it. She can’t say no to him.

He’s everywhere, surrounding her, loving her, protecting her—but when the truth of what he’s done to get her is revealed, will his love, devotion, and obsession be enough to keep her?