Giving it to the Monster (Saints and Sinners MC) 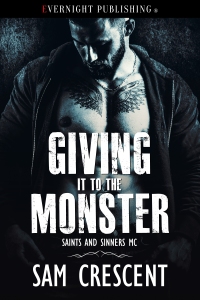 There has only ever been one woman Saint has ever loved, and she left him because he was turning into a monster. To lead the Saint and Sinners MC, he had to follow his dad’s rules. So Saint let Natasha go and embraced the club. At last, with his dad dead and gone, Saint was able to turn the club into something to be proud of, but he had lost the person who meant the most to him.

Then one night, Natasha returns to Sinners’ Corner. She falls into Saint’s arms, broken and bloody, and he has the chance to save her.

Natasha has always loved Saint, and walking away from him was the hardest thing she ever did. Now, though, the only person she can trust is Saint, the man she once ran from. She knows he’ll take care of her and help her keep her abusive husband away. Finally, Natasha sees past the monster Saint portrays to the man he’s become.

Is there a chance for them to have the future she always wanted, a future they both planned? Can two heartbroken souls finally find the happiness they deserve?

After returning home one evening with a text from Saint letting her know he was going to be late, she went into her bedroom, and took the items out of the bag. Staring at them on the bed, she took a deep breath, and removed the outer packaging.

Still, it had been a long time since she’d had sex, and being around Saint was making her hornier than any other time in her life.

Removing her clothing, she lay out on the bed, and calmed herself down. Resting her hands on her stomach, she started to caress up to touch her breasts. Pinching her nipples, she cupped her tits, squeezing them together. Closing her eyes, she imagined it was Saint. It was always Saint, and it had never stopped being him.

She pictured him entering the room, and seeing her. He’d come over to the bed, and she’d see his rock hard cock pressing against the front of his pants. He’d take it out and demand that she suck it. Once she opened her lips, and had him in her mouth, he’d touch her. He would start with his fingers on her nipple, tweaking the hard bud, moving to the next one. Saint would pinch her, creating a little bite of pain, and soothing it out with his hands. Down his fingers would go, and her own hands matched what he was doing.

Sliding her fingers between her thighs, she imagined his hands, two fingers sliding in deep.

She was wet. Getting her fingers slick, she drew them up, teasing her clit.

6 thoughts on “New Release: Giving it to the Monster”