So, for some strange reason my new release for, My Kind of Dirty (Dirty Fuckers MC) is missing, so I’m going to repost it. Also, Amazon links have been changed so I’m updating them, and it should take you to the book. 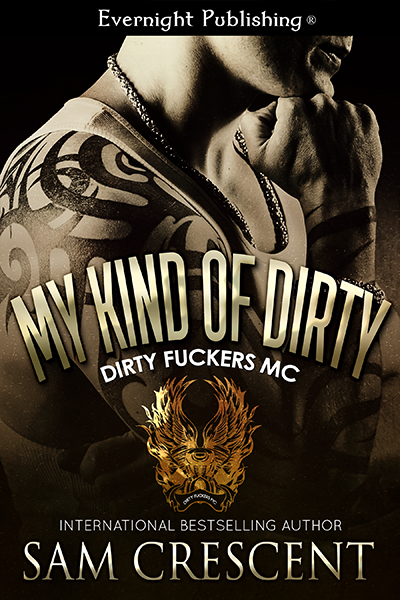 Grace has left behind an abusive ex and moved back to the town where she grew up, only to find it has been taken over by the Dirty Fuckers MC. But they’re not dangerous, and she even finds it enjoyable to work in the diner they own. However, one member is determined to become more than just a customer.

The last time Drake fell for a woman, he ended up with an STI, and being the laughingstock of the club. Grace is different. She’s not after his cock or looking to be part of the club. They start an unusual friendship, but neither can deny the attraction between them. Still, Grace’s fears, left over from her time with her ex, haunt her.

When Drake can’t take it anymore, he doesn’t give Grace the chance to deny him. The problem is one time is not going to be enough. He wants her by his side, as his old lady, and he’ll stop at nothing until he gets her. Will Grace finally admit her feelings, or will Drake be left out in the cold?

Drake sat down beside Grace as she had almost passed out on their running trail. It was seven at night, and the sun was setting.

“I feel like I’m going to throw up. Please tell me my ass looks a little smaller.” She rolled over, pushing her ass out.

He laughed, slapping her ass, and rubbing the sore spot.

“I’m too tired to hurt you back.” She rested her head against her arms, and he heard her breathing deeply. “Why did I want to do this?”

“I don’t know. You’re the one that was convinced your ass is huge. I could inspect.” He ran his hand over her ass, feeling her softness. His cock pressed against the front of his shorts, and he didn’t even try to hide it.

“Drake?” She released a moan, and he moved in close.

Grace turned her head to look at him.

“I’m seeing where there’s too much fat? I like this, baby. I can’t see where there’s any fat.” He gave her ass a squeeze, and she pressed her ass against his hand.

He moved his hand to the top of her thigh, moving up and down. She opened her thighs a little wider, and he couldn’t resist. He slipped his finger against her pussy, teasing her.

She gasped and lifted herself up, giving him better access to her pussy. Cupping her completely, he felt how wet she was.

Grace moved, turning, and her gaze was on his. Her cheeks flushed. In the distance they heard the rustling of the trees. Taking her hand, he placed it over his bulging cock. “That’s what you do to me, babe.”

“This will change us.”

“You’ve felt this change coming for some time now. You felt it long before the night of the party. This is how it’s supposed to be between us.” He cupped her cheek, sliding his fingers down to her neck, over her collarbone. The shorts were loose, and he pressed his thumb against her cunt, feeling the lips of her sex spread. She squeezed his cock, running her fingers up and down his shaft. “I’ve been wandering what it would be like to fuck you, Grace, to spread you out, and take you so fucking hard that you’re screaming my name.” Staring at her lips, he saw that she was biting her bottom lip. He wanted to bite that lip, to suck it between his teeth, and hear her moaning his name as she came from his fingers deep inside her. “Don’t fight it.”