I’m a little late in this message, but I wanted to wish you all a Happy New Year. I have many plans for this year, and most of them are about my writing. I want to complete old series that I’ve left hanging, and also get stuck into new ones. My muse is well rested, and ready to get started. I’ve been writing Gash over the holiday season, and he should be finished soon. I love this story, and I’m hoping you guys like it.

Also, I want to experiment more in my kitchen, and try new things. I love cooking and baking, and it’s what I do to relax at times. 🙂

So, to kick off the New Year, I have a book that was previously published in a interracial anthology (Guilty Cravings, Love in Black and White). Now, it has a new cover, and even though a few parts have been changed, the story is the same. 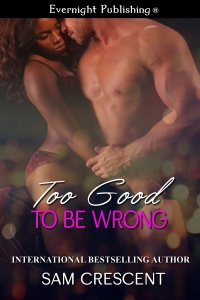 From the first moment Henry saw April, he wanted her but he was dating her best friend. There’s no way he can have her, so he did everything he could to forget about her, and ignore his feelings. Staying with the wrong woman with April close tests his restraint.

When a car crash injured April, and kills her friend, she doesn’t know what to do. She visits Henry as he’s just lost his fiancé, and she’s surprised when Henry offers to help her as she can’t work. For as long as she’s known him, April has been attracted to him but she would never act on it. She’d never betray her friend.

What will happen when they’re together, with nothing stopping them from going after what they both want?

The moment Henry touches her, April knows he’s the love of her life. Something so good, couldn’t be wrong, could it?

This was previously published as Guilty Cravings, which was part of the Love in Black and White anthology.