Today is Monday and I’m pleased to announce the release of Shades of Grey. This is the first co-written book with Natalie Dae who is an amazing writer. I will post all the details below.

The Unbreakable Trio is still only available at Bookstrand and the link is here.

The Valentines: William has been released at third party sites and I will post the links below.

I’ve also been noticing some searches about finding more information about me. I’m going to change the About Me page and include an email you can contact me on. This way if you have any questions I will post them up on my blog with a link to a familiarly asked questions sheet. I love reading them on other author blogs and I look forward to hearing from readers. 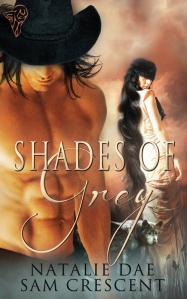 She’s everything Travis Williams has ever wanted, but with murder in the cards, will the hunky shifter succeed in claiming Sarah French as his?

Travis Williams has steadily fallen in love with ranch owner, Sarah French. She’s sexy as sin, beautiful inside and out, stubborn…and as spirited as one of her feistiest horses. She’s going to be hard to tame, but if anyone has the balls to do it, Travis does. After all, he wants to win her and win her good—by loving the Texan bones of her and taking her to heights she’s never been before.

Sarah French has a problem—she sees things in only black and white and doesn’t trust men. Though she employs all males on her ranch, it doesn’t mean she has to like them. An only child, she’s grown up feeling inferior since her mother died while giving birth to a much-wanted son. All her life, Sarah has vowed to be as good as-or better than-any man, and no one will persuade her otherwise. She’s strong, she’s tough, and she’s obstinate as all get out.

However, her icy façade is about to be melted, because not only Travis has her in his sights as a potential bed-mate, local bad-boy Clark James has made it clear he’ll take Sarah whatever way he can…including by force.

With her emotional walls tumbling around her, the suspicion that the man she loves is a wolf, and Clark making her cringe at every turn, Sarah must learn that not everything is so clear cut. Sometimes, you have to look at the world in shades of grey.

Reader Advisory: This book contains a graphic but brief description of injuries sustained by a minor character after a violent sexual assault.

Book two in The Valentines Series

Time is running out.

He promised to keep her safe, he promised to protect her. William Valentine failed. On the night his father was murdered, the same wolf took Katie from him. The one and only surviving witch…or is she?

Katie White is going to die. She can feel it. Her determination and thoughts of William are what is making her fight to stay alive. But time is running out.

An old foe from William’s past is determined to see Katie finished.

Will William make it in time?

The Valentines-the war has only just begun.

Reader Advisory: This book is the second in a series and contains scenes of kidnap and violence.

One thought on “It’s Monday Again”