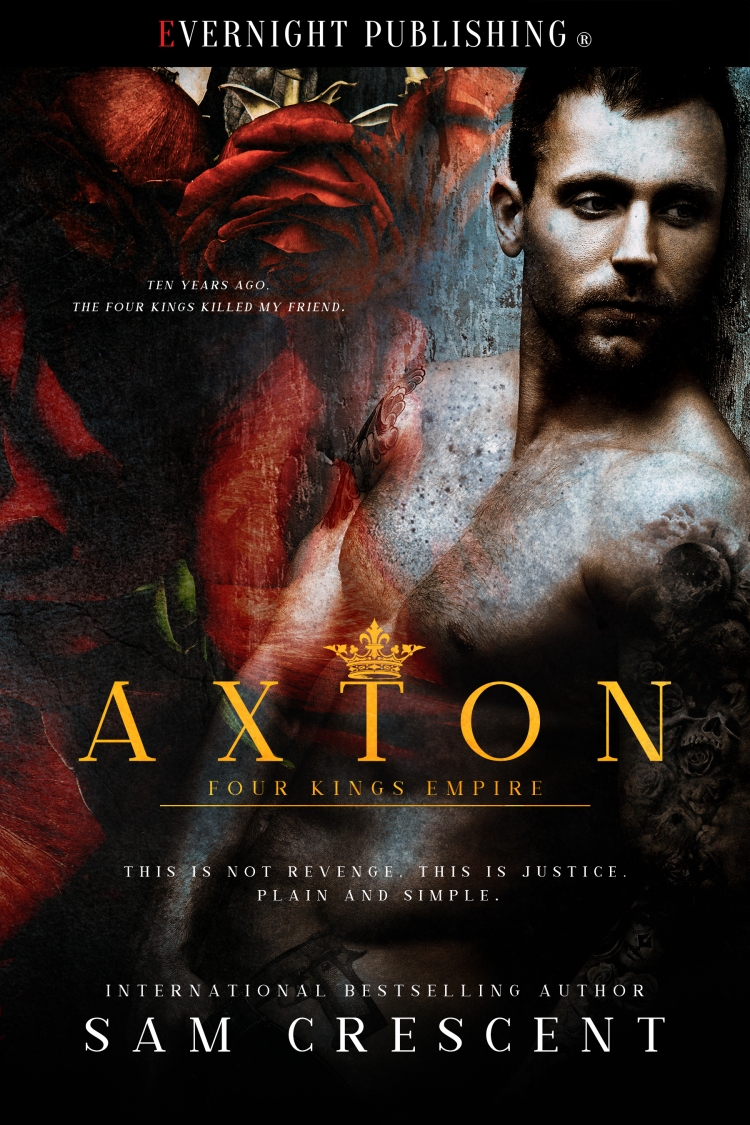 Ten years ago, the Four Kings killed my friend.
I’m not going to kill them.
I’m going to make every single one of them pay.
Make them pray for death, and take everything they’ve ever loved.
This is not revenge. This is justice.
Plain and simple.

It’s been ten years and the girl he once knew is back, working for the Four Kings as their PA. He’ll keep an eye on Taylor, and he certainly won’t let anyone else touch her.

When Taylor had to pull her best friend’s dead body out of the lake, it changed her life forever. Discovering a diary, she uncovered a secret relationship with one of the four kings. The four most powerful families in town. No one goes up against them without losing everything they hold dear. Something happened between her friend and one of them, and she’s going to find out what. She’ll bring them down and make sure they stay down.

She hated how she responded to him. The thickness of his arms. His muscular body. The way she knew he’d hurt her if given the chance.

There was something hard and rough about him.

He made her ache in ways she’d never experienced.

He stepped into the room and she stayed in her spot, waiting, watching. He could pounce at any second.

Did she want him to do that? To take what he wanted?

Axton was a cold man to the core. She’d read the stories about him, and months later seen the news of how old kiss-and-tell flames had suddenly been met with huge bills, unpaid debts, and facing homelessness.

Going up against this man had consequences. If you didn’t take him down, he’d push you into the dirt and leave you to rot.

He was, after all, a businessman.

Suddenly, he stepped up close.

She didn’t back down, nor did she cower away.

Staring into his dark brown eyes, she waited.

“You didn’t lodge a complaint about me.”

“We weren’t in working hours.” She held in her gasp as his hand went to the counter beside her hip. His arm so close to her, and yet, he still didn’t touch. They weren’t touching at all, but he was close.

Anyone who came into the bathroom would think they were kissing.

“I don’t know what you think you’re up to, Taylor, but be warned, I’m aware.”

“I’m not a stupid man. Ten years have gone by since I last saw you. You magically appear out of thin air and you expect me to believe it’s all down to wanting to work hard.”

“You have a problem with my work ethic?” she asked.

“You’re one of the hardest-working people I know.”

She ran her gaze down to his lips, wanting them on her. Licking her own in return, she stared back up at him. “Then I don’t see the problem.”

She gasped aloud as he gripped her hip and suddenly he was pressed against her. His solid body held her captive, keeping her in place. She couldn’t move.

Placing her hands on his chest, she stared up at him. “What are you going to do?” she asked. “We are in working hours.”

“Whatever the fuck you’re doing, stop it. Whatever it is you think you’re after, you won’t find it.”

She tilted her head to the side. “So much paranoia locked up in one package. Tell me, Axton, do you think the entire world is against you?”

He leaned in close, so close they shared the same air.

“I don’t think it. I know it. Be careful here, Taylor. I’d hate to see anything bad happen to you.” 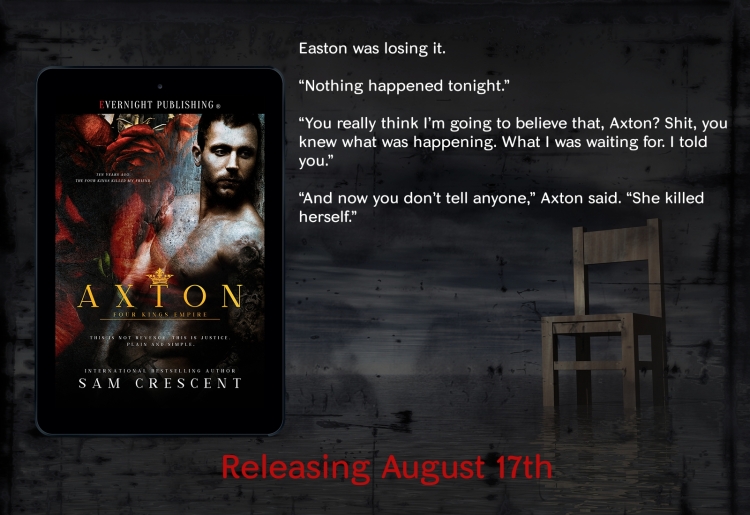 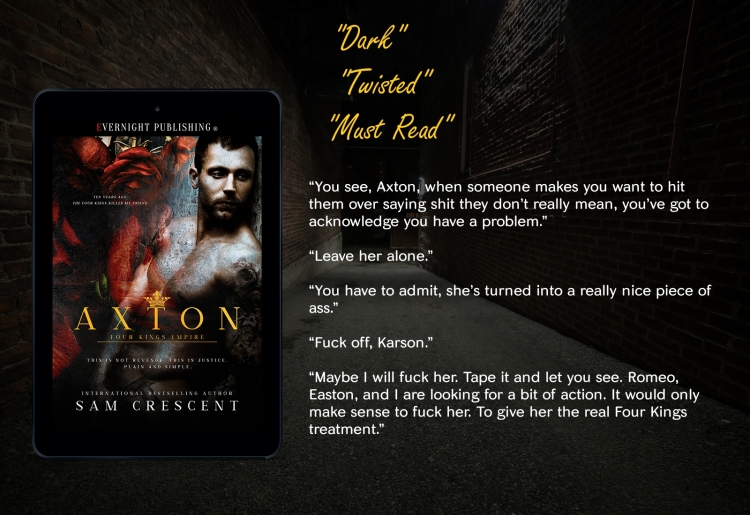 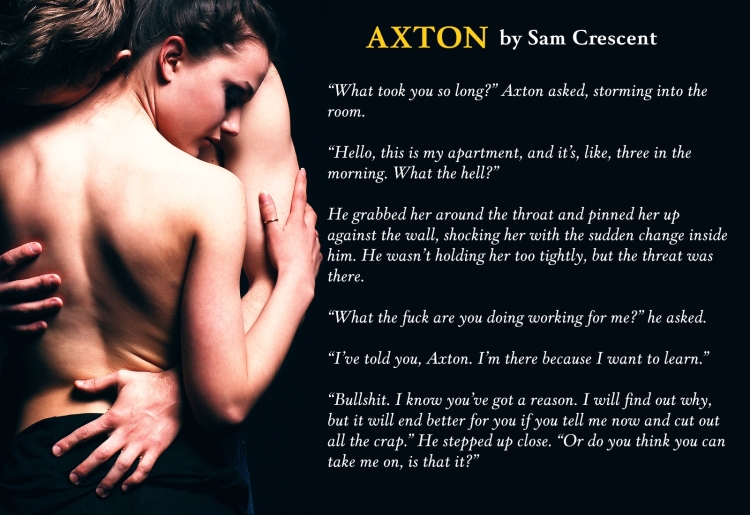 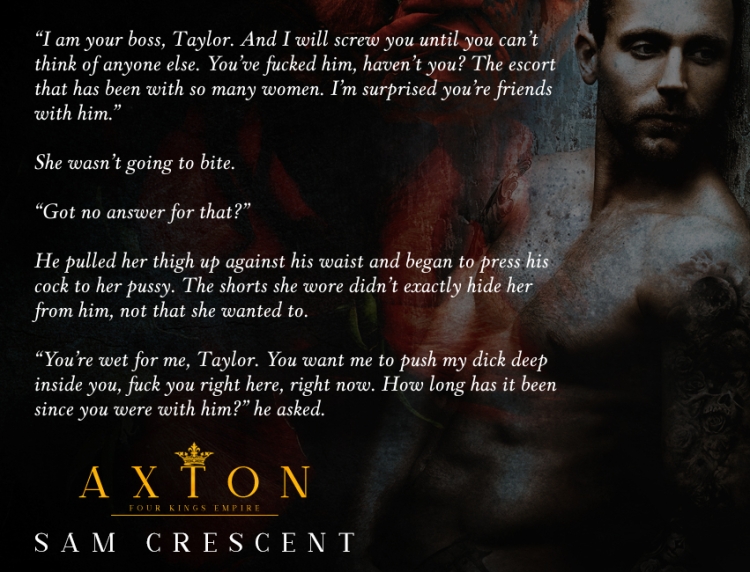