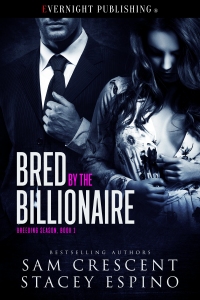 Title: Bred by the Billionaire (co-written with Stacey Espino)

Adora Garcia isn’t interested in being the breeding vessel for some arrogant billionaire. She has plans for her life and they don’t include being knocked up by a man over twice her age. Her single mother cleans Tobias Bennett’s penthouse suite, so when Adora refuses his indecent proposal, he threatens to find a new maid.

Tobias needs an heir, but he’s not ready to settle down, and certainly not interested in love. He doesn’t have a plan until he sees the curvy brunette standing in his condo. Everything he wants, he gets, and he wants Adora. What he doesn’t expect is the rush of possessiveness that takes him by storm.

Will Adora give up her virginity to the ruthless businessman? Can Tobias open his heart after keeping it closed off for decades?

Title: Bred by the Bushmen (Co-Written with Stacey Espino)

After nearly ending her own life, Opal books a soul-searching Alaskan wilderness tour. She’s used to loneliness and rejection, but needs to learn how to love herself. When things go horribly wrong on the tour, she finds herself cold, alone, and facing certain death.
Caleb and Damon have the perfect life. They live off the grid, far from society and its destructive influences. But it doesn’t take long for the White brothers to realize what’s missing. They need a woman, and crave a family of their own. When their dog leads them to a lost hiker in the woods, they swear she was dropped straight from heaven.
It will take a lot of hard convincing for the bushmen to prove life at their cabin is better than what Opal left behind in the city. And they won’t take no for an answer. They plan on keeping Opal, loving her, and filling her with their baby. 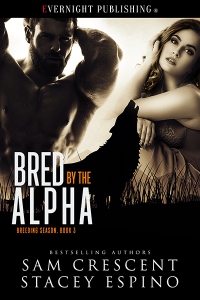 Title: Bred by the Alpha

It’s breeding season, and this alpha is ready to claim his mate…
Liam is the pack alpha, and the only wolf without a woman. When he discovers the new human in town is his destined mate, his wolf demands he mark her and take her virginity. Only she doesn’t know werewolves exist, and danger seems to follow her wherever she goes. He’ll have to play nice until his love is reciprocated.
Rebecca’s anxiety has kept her lonely and isolated for most of her life. Moving far from the city is her last attempt at finding peace. What she finds is more trouble than she can handle—and a man who’s ready to kill for her. It doesn’t take long for Liam to sweep her off her feet. He makes her feel like a queen, and leaves her body desperate for every carnal pleasure.

Life in the forest isn’t without problems. A rival pack is set on taking everything Liam has built over the years, including his new mate. The alpha can’t keep his dark secrets from his woman forever. What will happen when Rebecca realizes she’s been sleeping with a wolf? 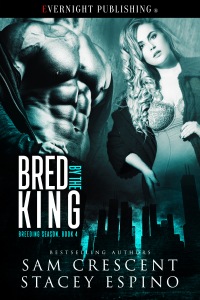 Title: Bred by the King (Co-Written with Stacey Espino)

Can love exist in a lawless world?

It all happened so fast … the virus, the mass deaths, the collapse of civilization. The government insisted Ashley was unique, so she was branded, permanently marked as a fertile woman. She considered the so-called blessing to be a curse. Every man left alive on the planet wanted to use her as a breeding vessel. She wanted no part of becoming a baby-making machine.

Draven knows how to survive. After spending most of his adulthood in the Marines, the transition to the hostile new world felt almost seamless. He created a kingdom from the ashes, keeping up walls to protect the people he chose to allow inside. It isn’t until Ashley shows up at his gates that he realizes what he’s missing. He wants the curvy young virgin to give him an heir. What he doesn’t count on is falling in love…