Signing up as a mail order bride wasn’t how Anna thought she’d get married, but with money tight, and her family needing help, she has no choice but to become a bought bride.

This is just a business transaction, or so she tells herself, but when she sees Landon, her prospective husband for the first time, she can’t help the instant attraction.

He tells her he’ll go easy, that he’ll give her time to acclimate to their new relationship. But a part of Anna doesn’t want that. She wants to jump head first into this new adventure, even if that means she doesn’t know what the future holds.

Landon prefers his isolation to social settings. It’s worked well for him over the years, but he’s getting older, has needs. He wants a bride, a family. And buying a woman seems like the easiest, fastest way to make that his reality.

When he sees Anna for the first time, he knows she’s the one for him. Curvy in all the right places, innocent in appearance, he knows she’ll make a good wife and a good mother to his children.

She’s not a prisoner, and can leave at any time, but Landon wants her as his. If she runs, he’ll follow.

Warning: This is a fast, over-the-top story about one alpha hero who only has eyes for his heroine. It gives you that Happily Ever After, but make no mistake it’s filthy as can be 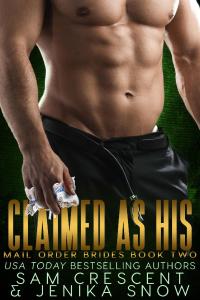 Title: Claimed as His (co-written with Jenika Snow)

First came marriage, then came a baby, then came the drama of being a mail order bride.

Lucy had become a mail order bride, and although she should’ve backed out she was lonely. Upon first meeting Ian his arrogance got under her skin. She should have left right then, but her attraction to him went deeper.

And so she found herself staying married to a man who was used to getting what he wanted, when he wanted it.

But what he didn’t know about her was that Lucy wouldn’t bend to his will. And what she would soon find out was that Ian got turned on by that.

But the longer they’re married the more she sees that he is a good guy who got a bad rap. And her attraction soon grows to love. Even if she has no intentions of leaving Ian, his family has other plans, ones that don’t include Lucy.

All Ian wanted to do was humiliate his parents. He wanted a bride that came from a poor background, had no connections and nothing to offer the family name. She’d be his choice, not theirs, so finding the mail order bride website was a saving grace to him. The moment he saw Lucy, he knew his plan would work.

His parents wouldn’t see her as perfect, and to him that was all he needed.

What Ian never expected was the overwhelming need to protect her. He didn’t want his vile family to hurt Lucy, and even though he could be an asshole, he couldn’t bring himself to disregard her.

However, his plan is already in motion. But he can prove to Lucy that no matter what, he loves her more than anything.
He doesn’t just want to use her for revenge, he wants her for life and to have a real family. That’s what he’s always craved.

Warning: If you like your heroes with a hint of arrogance but also devoted toward their women, and your heroines strong and determined, this story is for you. Oh, and of course it’s as filthy as can be!