All of the books in this series are standalone, and don’t need to be read in any kind of order. The Hero’s will all have one thing in common, they’re bad boys. 🙂

Kurtis is used to getting what he wants. Women fall at his feet, and he can simply pick which woman he wants for that night. Tillie Powell, however, is completely different. She has never fallen for his tricks, and she’s not impressed by his wealth.

When he finds out that a guy he doesn’t like wants her, Kurtis snaps. No one can have her but him. The problem is, he’s also found out she’s a virgin. Will Tillie believe he’s interested in her, or only want her to pop her cherry?

For the summer he takes her and their friends away to his beach house, and propositions her. He won’t try to take her virginity but she can experiment with him without fear of him spreading vicious rumors.

Can Kurtis turn Tillie into his virgin bride and make her fall in love with him by the end of the summer? Or will he be the one bad boy who can’t be reformed?

Title: Play with Me

In an attempt to help her father, Olivia West leaves herself exposed to not one, but two men who have been craving her for a long time. Can she become everything they need, or will she end up running from the two people who love her more than anything?

Daniel and Archer Fields are twins with the same passion for kink, and the need to control a woman. The moment they see Olivia, they know she’s a submissive who needs a guiding hand.

Will she take the leap and play with the two men who’ve wanted her from afar? Or will she run away from the kind of passion they crave? 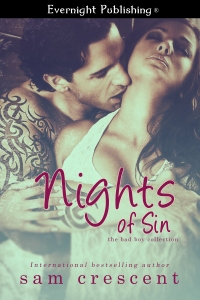 Alexa is a plus-size librarian who has never lived a life of passion or adventure. When she is her best friend’s plus one at a party, she never imagined she’d be in a sex club that offers every wicked desire she has ever had. There, she discovers Corey, a man who holds her attention like no one else.

After being used to women falling at his feet, Corey’s the love and leave them kind of guy. No woman holds his interest for longer than a few fucks. When Alexa shows no signs of coming to him, he has no choice but to chase her. He will break all the rules for a chance to get between her thighs.

What could possibly be wrong with one night of sin? However, Corey’s not sated with one night, nor is he happy with two. Alexa has gotten under his skin, and he can’t get rid of her.

Corey is shocked to discover he’s falling for Alexa. He can’t let her go, but when he finds out Alexa’s keeping her darkest secrets from him, he knows he has to do something to show her he’ll be everything to her.

Can Alexa open up about her darkest desires? Once Corey knows the truth will he walk away? Nights of sin has suddenly become so much more.