Title: Giving it to the Biker

Rage has wanted Penny for a long time but he’s held back as she’s not club property. He gets to see her as she’s the sister of one of the brother’s wives. However, when her personal life stops her visiting the club, Rage won’t stand it. He’s going to have her, and claim her as his old lady whether she likes it or not.

Penny doesn’t want a biker as a husband. She can’t trust a club, and after watching her sister with a biker, Penny is convinced she’d never be happy. Rage will not take no for an answer, and Penny can’t deny the attraction.

Together they explore Penny’s fantasies, and Rage is determined to make sure there’s not a chance for another man to take what belongs to him. He doesn’t share, and he’s claiming this woman as his, and his alone. Rage’s feelings are put to the test when a rival gang takes Penny.

Rage will stop at nothing to get her back. What will happen when he unleashes his namesake on the men who took her? Will Penny run, or will his show of protection seal their future?

Title: Giving it to the Enemy

Elena is the estranged sister of Saint, Prez of the Saints and Sinner’s MC. She was once part of the world until their mother tore her from everything she knew. Now, she doesn’t belong, not in the club, and not as Saint’s sister either. When she meets Pipe in a bar, everything changes. He awakens a need inside her that she can’t deny.

Pipe doesn’t want anything from Elena other than her. He’s not after a war, nor is he after blackmailing Saint’s little sister. She’s not like any other woman he’s ever known. All he wants is to get to know her.

Away from either club, they explore their attraction, and it doesn’t take long for their feelings to deepen. Saint is no fool, and when he discovers that Pipe has been screwing his sister, there is hell to pay.

Pipe will not let Elena pick between him or Saint. He’s prepared to make a bargain that brings the Saints and Sinners MC closer to the Hell’s Wolves. He’s not interested in war. He wants peace, and to keep his woman safe. Will Saint let him live? Or will Pipe have to go and grab a steel pipe to take care of business one final time?

Title: Giving it to the Bad Guy

Sarah has had enough of her ex, Ralf. Not only did he leave her, but now he has kidnapped her, dragging her all the way back to Sinners’ Corner, expecting them to carry on with a relationship.

However, when Ralf decided to walk out on her, she met Knife. He’s a member of the Hell’s Wolves MC, and he makes her heart race, and her panties wet. Now that she’s back in town, Knife is not going to let Ralf win without a fight. From the first moment he met her, Knife has wanted her, but he respected her wishes, giving her space.

The time for waiting is over. May the best man win!

Title: Giving it to the Monster

There has only ever been one woman Saint has ever loved, and she left him because he was turning into a monster. To lead the Saint and Sinners MC, he had to follow his dad’s rule. Doing that, he let Natasha go, and embraced the club. With his dad gone, he was able to turn the club into something to be proud of. The biggest problem, he lost the person that meant the most to him. Then one night, Natasha falls into his arms, broken and bloody, and he has the chance to save her.

Natasha has always loved Saint, and walking away from him was the hardest thing she ever did. However, the only person she can trust is the man she once ran from. She knows he’ll take care of her, and help her keep her husband away.

Back in Sinners’ Corner, Natasha sees the change that Saint has made. She sees the man he’s become. Finally seeing past the monster he portrays. Their feelings never stopped, and now they’re together, nothing can stop them finding each other again. There is a chance for them to have the future he always wanted, a future they both planned.

Can two heartbroken souls finally find the happiness they deserve? 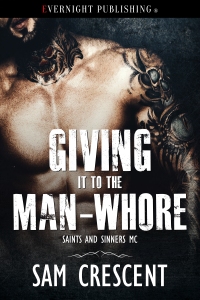 Title: Giving it to the Manwhore

For a long time now Melissa and Pea have enjoyed the pleasures of an open relationship. They have found a life that brings them together. They are friends, lovers, along with being husband and wife.

Now they’ve agreed to be faithful!

Mel is pregnant. Her relationship with Pea is in new territory and she’s scared. They’ve promised to be together but does that involve children?

Pea is completely, totally in love with Mel. He’ll do anything for her. Their marriage has taken them to places he never thought possible. The other women are gone, and he doesn’t miss them. There’s only one woman he wants in his arms, in his bed, and that’s Mel. She doesn’t take any shit from anyone. Her hearts so big and yet rarely anyone sees it. She hides behind a tough girl facade, but he sees her. He knows her, and above everything else, he loves her. Finding out about the baby is the best news for Pea. He wants a family, a big one with Mel, and he knows they’re going to make amazing parents.

Everything is working for them. A healthy pregnancy, their marriage, what could possibly go wrong?

There’s danger lurking in Sinners’ Corner, and when Mel is caught in the crossfire, can Pea get to her in time?

20 thoughts on “Saints and Sinners MC”