Title: Falling for the Enemy

June Armstrong has hated Trey Hunt since high school. Yet, no matter how much she hated Trey, she also had the biggest crush on him. It was sick crushing on her enemy, but she got over it—or did she?

Years later, June is a success. She’s confident and loving life. However, Trey works across the street from her. He’s sexier, covered in ink, and he makes her melt more than before. To complicate her mixed emotions, he wants her badly and won’t take no for an answer.

Could falling for her enemy be that bad? Trey’s a temptation she can’t refuse. What’s wrong with giving in a little?

Title: Falling for the Jerk

Dale and Molly have a rough history. They dated in high school, and when Molly turned up pregnant, everyone rejected her. What the town of Winters Fall doesn’t know is Dale’s the father of both of her children.

Dale keeps trying to do the right thing, but at every turn, Molly rejects his marriage proposals. The tension between them is at a breaking point, and he won’t take no for an answer any longer.

Molly let Dale go so he could live his life, but that didn’t mean she loved him any less. The love she has for him has stopped her from being with anyone else.

Now Dale won’t let her keep their secret any longer. It’s time to put their past behind them and find a future together. He’s been a jerk, but he’s not going to lose the only woman he’s ever loved. Molly is his, and she always has been.

Can these two unlucky love birds finally find their happily ever after? Can they put six years of pain behind them? 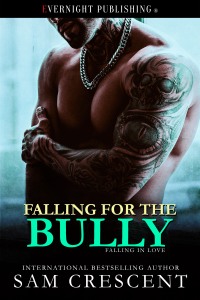 Title: Falling for the Bully

Max Carter was an asshole as a teenager. He did stupid things and one of them was hurting Aria Smith. As a grown man, he has to own up to his mistakes, and now he has to prove to her, he’s changed. When he discovers she’s going on a date with some stranger, jealousy fills him. She’s too young and sweet to take care of herself.

Aria’s first mistake was getting drunk. Her second one was not deleting her internet history. Her third mistake, agreeing to use Max for all her sexy desires. He’s an asshole. One she’s been determined to avoid. But it’s the little things. How he walks her to work and back home every single day. The touches as he’s near. Aria is not invisible to him, at least not anymore.

It was only supposed to be a bit of fun. Their friends were never supposed to find out. However, they can’t hide their feelings for one another, at least Max can’t. For him, it’s not about fucking, he’s in love with her. Only now, he’s got to make her fall for him.

The only problem? He may have gotten her pregnant as they had a little malfunction with one condom, which he didn’t tell her about.

He can only hope Aria will forgive him, because he wants nothing more than to dedicate his life to her and her alone.

This single man is ready to settle down and become a husband and a father but will his woman give him the time of day?

This is the concluding part in the Falling in love series.