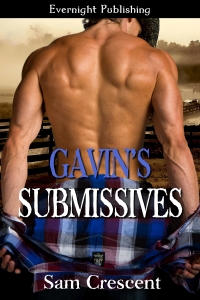 Heidi finally leaves her abusive husband after several years of unhappiness. She moves back to Creek Valley to be with her friend, Landon. However, she can’t be with Landon because he’s in a serious relationship with Gavin.

Gavin is a Dom and he doesn’t like to share. When his lover tells him about Heidi and her submissive side he’s intrigued by her, but he can live without a woman in his life, as long as Landon is with him.

From the moment all three meet up the chemistry between them sizzles. Gavin sees Heidi’s submissive side and her fear of him. When all of her protective walls break down, neither of them are prepared for Landon’s decision. How can someone choose between the two people he loves?

Can Landon fix what he has broken? And can Gavin handle having two submissives under his care?

Kade and Steven have been waiting for a woman to complete their family. They’ve been friends their whole lives but they want a woman to share. No woman has captured their attention until Holly Walker comes to work for them.

Holly is quiet. She works hard in order to help her brothers and sisters. The money she doesn’t use for them is taken from her by her father.

Together, Kade and Steven awaken Holly, caring for her and loving her. Kade is a Dom and he takes over making decisions while Steven loves her completely in his own way.

Can Holly truly give herself to two men? She’s only used to depending on herself. Steven and Kade have a battle on their hands to make her their woman.

Damon’s a loner. He travels from place to place never settling down. His passions have left him lonely. There is not a couple out there who can handle his desires. Then his bike breaks down in Creek Valley, and all bets are off.

Andy and Meredith have been happily married for a few years. When Damon stumbles into their lives, neither of them anticipated the change he was about to make. Even happily married, Meredith and Andy knew they needed more. Damon sees the truth in the married couple. Meredith is a true submissive while Andy is a switch, and this complicates their relationship, each seeking from the other something that they cannot give.

Can they trust this man to complete them and give both of them everything they ever wanted? Damon knows it’s a challenge, but he’s never backed down from a fight. They could all be happy, and it’s a challenge he’s more than prepared to face.