So, we’re nearing the end of 2017 and with it, I’m trying to figure out what books to write to wrap up the year. I intend for 2018 to be a really busy year, and I hope I don’t have to worry about any re-releases. I don’t even want to go on about what happened at the end of last year. Anyway, I will not moan lol.

I’m working on a couple new ideas for a couple of series. More info to come I hope. In other news, Billionaire Hero (Billionaire Bikers MC) has been accepted by Evernight and more info is on my Coming Soon page.

Before I go, I’m sharing my upcoming release which is now available for pre-order. Curvy Women Wanted are all standalone books but have the same theme; curvy woman and the men who love them. 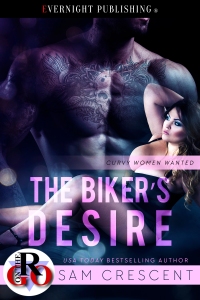 Rock has watched Adele Sparks for some time now. She’s a cleaner, and there’s not one thing he doesn’t know about her. Anyone who comes to his clubhouse, he has checked out, and she’s squeaky clean. She’s not like any woman he’s ever known. She doesn’t try to flirt with him, nor does she judge the club.

He wants the curvy cleaner, and he’s going to have her.

Adele likes Rock, the impressive Prez of the MC that she works for. She’s overheard the women talk about him and what he can do in the bedroom. She doesn’t believe it. Having been married before, the only orgasms she’s experienced were at her own hand.

Until Rock tells her what he wants.

He wants her naked.

He wants her thighs wrapped around his waist as he takes her hard.

Pleasure like she has never known is within reach.

The biggest problem? Can she keep her heart in check?

After all, there’s no way a man like Rock will want forever.