I’m hard at work on Death’s story. I don’t know what his title is going to be but then I’ll be working on Blaine. It has been a bit of a confusing week for me as I’ve had all The Skulls and Chaos Bleeds kids invading my thoughts, demanding their story. So, I’ve actually made a start to some of their stories as well as the new MC series I was talking about. Please, if you’d like to know what I’m doing on a daily basis you can find me on Facebook. I do try to keep regular updates.

Whizz has a tentative release date of November 28th. This could change for many reasons but I’m going to work my butt off to make sure he’s released.

Now, A Fighter’s Choice is releasing Monday and is available for Pre-Order at Amazon. Jasper is a bit of a jerk but give him time. I loved him from the moment I started writing him.

Jasper is filled with violence and the only way to unleash it was to make money in illegal fights. Ever since he left home he’s been fighting and saving his money, living a simple life of pain and sex. His life was fine until he noticed her living across the hall.

Amber spent most of her life in foster care. She knows how to take care of herself and is prepared to do anything to keep herself alive. Working as a waitress in a strip club was not something she wanted to do but it pays enough to help. She noticed the man across the hall but he was bad news with all of his bruises.

One chance meeting turns into another. Jasper can’t keep his hands off her and Amber doesn’t want to fight the lust. Together they surprise each other with their need and feelings. However, Jasper’s gotten noticed and now he has to pay the price.

He has to make a choice, go deeper into the fighting world and run the risk of losing his life and Amber, or run with his woman and find love, life, and happiness. 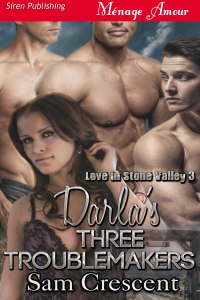 Darla’s Three Troublemakers went live on Bookstrand. It will take a couple of weeks for this book to go to Amazon but I am keeping an eye on it.

Darla has always had a crush on the Willis brothers. Luke, Jon, and Ryan are all brothers who share one thing, they are all in love with Darla. They will do everything in their power to protect her. However, one drunken night spent with Luke leaves consequences. Pregnant and alone, Darla kept the identity of the father to herself.

With the truth out, the Willis brothers set out a plan to woo their woman. They’ve always wanted to share her and now is their chance to have the woman they’ve always craved. Can Darla accept three men in her life?

Someone from their past is threatening their future. Whoever it is, is determined to hurt Darla and their knew found happiness. Can the three brothers save the woman they love before it’s too late?