I know it has been a couple of days since release but I can now give you the links for Sleeping with the Boss.

I will now post up all the links here. 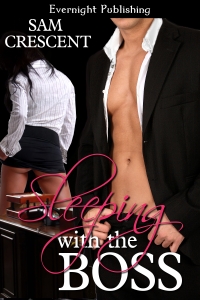 Heather Booth has been in love with her boss since the moment she started working for him. The only problem, Julian Goff is a horn dog. When he’s ready to ditch a woman, he gives the women a piece of jewellery and sends them on their way.

When Heather and Julian get into an argument over her behavior outside of work, the passion between them ignites. They have sex on his desk when anyone could walk in and catch them.

Julian wants Heather more than he’s ever wanted any other woman in his life. He doesn’t do commitment. During a private conversation with her friends, Julian hears Heather’s true feelings for him. He has no choice but to let her go.

Never before has a woman got under his skin. Can Julian earn Heather’s trust back, and will he finally have the courage to give the woman he loves a ring?